October 8th is National Fluffernutter Day and we couldn’t think of a better way to celebrate than by mixing some of our Vanilla Ooey Marshmallow Goodness with peanut butter and smooshing it between two slices of white bread. That got us asking -- where did the Fluffernutter Sandwich come from? The history of the Fluffernutter sandwich starts in 1914, when Emma E. Curtis, partnering with her brother Amory, suggested adding a spread of their Snowflake Marshmallow Creme between two crackers as an afternoon snack. In 1918, Emma invented the “Liberty Sandwich,” in a recipe pairing marshmallow creme and peanut butter between oat bread slices. The concept of enjoying a marshmallow-based sandwich for lunch or dinner with a patriotic twist was well timed -- the United States was urging people to ration meat and other goods at least once a week. The early 20th century created much demand for sweets and the industrial revolution brought with it manufacturing opportunities. When Archibald Query sold his own marshmallow creme company to H. Allen Durkee and Fred L. Mower in 1920, the pair were able to mass produce the sweet, spreadable cream. Eventually, they renamed the company and their bestselling product, Marshmallow Fluff.

After Emma Curtis’s death in 1948, Amory continued to run the Curtis Marshmallow Factory until the 1960’s. By then, Massachusetts had several competing confectionery companies, all fans of marshmallows and sweet treats. From the 20’s thru the 1940’s, Durkee-Mower predominated the industry. Capitalizing on Fluff they pioneered candy advertising, using radio shows to market the Flufferettes and publishing recipes and cookbooks using marshmallow creme. 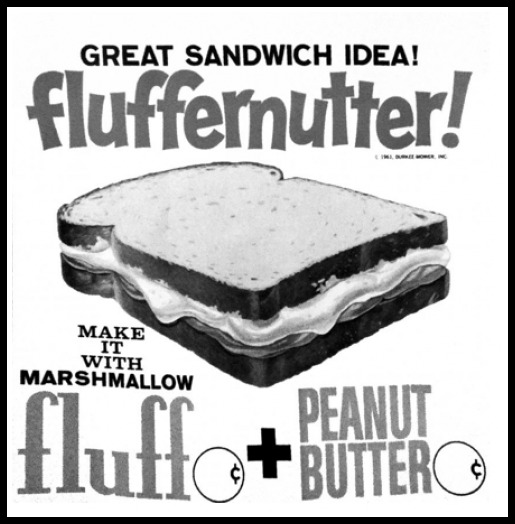 In the 1950s, supermarkets emerged and changed how food manufacturers advertised. First, recognizing the buying power of children, Durkee-Mower knew that they needed to shift gears and really focus on children and their mothers (who were primary household shoppers). Knowing that most parents would be more willing to buy a sweet product if it offered some nutritional value, like pairing the fluff with peanut butter. Partnering with a New York publicity firm, Durkee-Mower launched a broad campaign for Fluffernutter Sandwiches! Seeing it’s popularity soar, both in local markets and nationally, the company expanded its advertising efforts to include black-and-white television ads, and beat out competitor Kraft Foods’ attempt to popularize their own version of a peanut butter sandwich. To this day, “fluffernutters” are really the only way to describe the combination of white bread, creamy peanut butter, and marshmallow cream.

Today, we are still fans of the famous marshmallow + peanut butter combination, but we’ve upgraded our marshmallow game to include some amazing creme flavors. The Ooey Marshmallow Goodness (OMG) we make in-house is nostalgic of those Emma Curtis days, but our flavors you just can’t find anywhere else. For example, Gimme Gimme S’More OMG has crushed graham crackers and fudgey chocolate swirled in, so on its own or spread over a graham cracker, it’s just a new way to enjoy an American classic. We are big fans of mixing in fresh fruit, and this summer our Strawberry Shortcake OMG paired exceptionally well with peanut butter, sunflower butter, and almond butter for a fluffy snack. Speaking of having too much fun with marshmallows -- Each year, the town of Sommerville, Massachusetts celebrates all things marshmallows with a Fluff Festival! XO Marshmallow was invited to participate a few years ago and we’ve made it an annual tradition ever since -- we love Boston and bringing our Chicago-based marshmallow cafe and wonderland to the east coast. Who knows -- maybe you’ll see our recipes in a cookbook and pop-up sometime soon!